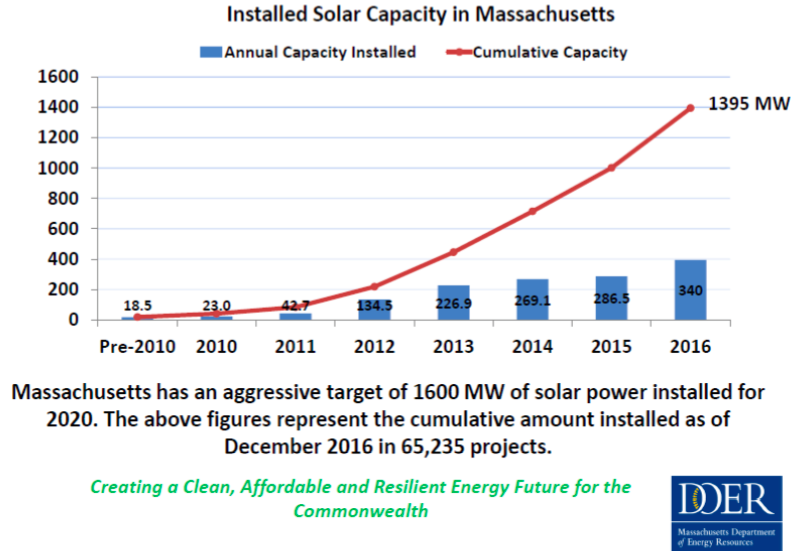 As of December 2016, the cumulative capacity of Massachusetts solar power totaled at a lofty 1,395 megawatt (MW) spread over 65,235 projects, with progressive increase in annual installments. Perhaps even more impressive than the built solar potential is the timeframe in which it was accomplished; Governor Deval Patrick established a "250 MW of solar power by 2017" goal in in 2007, a year in which only 3 MW existed in Massachusetts. In response to the surge of solar development, Patrick raised the bar in 2013 to a goal of 1,600 MW by 2020; current Governor Baker has expressed his commitment to the cause. Figures from 2015 estimate the solar workforce in the state to be roughly 15,095 jobs, making it second in the nation after California.

It doesn’t hurt that its capital is also a hotbed of policy, market, and technology research as it pertains to solar energy, including MIT’s Energy Initiative. Quasi-governmental body Massachusetts Clean Energy Center further feeds burgeoning clean industries and technologies with the region’s educated workforce.

Ignoring national trends and private bodies that encourage the expansion of solar development, Massachusetts’ ranking can be tied to the commitments made by local governments as well as the policy environments they create.

In its effort to set a precedent, the state initiated in 2014 the State Photovoltaic Energy Program. Ten pieces of land beside state highways were designated for solar arrays at zero upfront capital cost for the state, producing energy at half the cost to the state during a 20 year contract. MassDOT has also supported the roll-out of solar canopies, such as the 490 kW installation at a state research center in Hopkinton.

MassDOT and other state agencies have been tapped by Massachusetts government to be critical actors for its emissions and energy use reductions goals under the Leading by Example program instituted in 2007. The program’s solar canopy program alone is responsible for over 6.5 MW of installed solar capacity since 2014.

Known for its extensive history of encouraging innovation and leading the charge, the Bay State first began its foray into solar energy in the 1970s, in response to the oil crisis. Many were tax exemption policies to encourage renewable energy expansion, and remain in place to date. Net metering and a grid integration of renewable energy gained a foothold in the 1980s and 1990s, Net metering, or the system of the reimbursement by utilities for an individual’s unused, privately-produced renewable energy, continues to be a hotly-contested issue.

In addition to net metering, solar renewable energy credits (SRECs) are awarded to panel-owners for every 1,000 kWh of solar energy produced. Credits can be sold on a separate market and therefore be used to pay off the upfront costs associated with solar panels and installations.

Both industry and private users stand to benefit from the state’s incentives, with tax credits available for all. State legislators are currently negotiating a revamped program with long-term assistance in mind. The updated iteration of the policy is meant to develop in tandem with the state’s solar market; as technology becomes more sophisticated, cheaper, and widely available, incentives will taper off. Greater aid will be given to projects that are located on landfills, servicing low-income communities, or incorporating energy storage.

With 80% of annual energy expenditures are spent acquiring energy from out of state, Massachusetts has a clear incentive to continue to expand its share of renewable energy in its power portfolio.