Distributed energy, or distributed generation, is electrical generation and storage performed by a variety of smaller, grid-connected devices called distributed energy resources (DER). These DER systems–including solar, wind, and battery storage–are an alternative, or enhancement, to the traditional power grid. Increased demands on the nation's electrical power systems, electricity shortages, and high electricity bills have driven many utility customers to seek other sources of quality, reliable electricity. Additionally, shifting attitudes in favor of renewable energy have led many to seek alternatives to the traditional power grid.

In order for DER systems to be the most energy and cost efficient, they must be able to integrate within the existing electricity grid. This calls for state utilities to have targeted DER development and integration goals during resource planning. 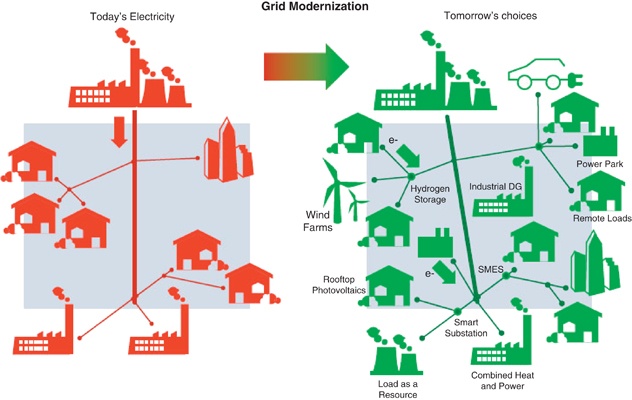 According to the Department of Energy, a crucial step in modernizing the electrical grid is enabling the development of DER. Historically, state utilities have not taken DER into consideration during resource planning. The result is limited options and access to DER systems, including many renewable energy systems such as solar PV installations. In addition, economic benefits go unrealized due to integration challenges.

A key aspect of DER is that each system is designed to address the unique needs and goals of each state or community to best add value. Therefore, widespread implementation can not happen successfully without careful attention to planning at the state distribution system level. According to the DOE's report on state engagement, the states currently employing the most “advanced” electric system distribution planning are California, Hawaii, Massachusetts, Minnesota, and New York.

Smart resource planning, flexible grids, and DER integration set the stage for efficient and effective clean energy development, such as solar. Massachusetts has the 6th largest solar capacity, and has generated the 2nd most solar jobs of all states. In 2014, the Massachusetts Department of Public Utilities (DPU) performed an investigation to establish a platform for utilities to modernize the electric system. Goals were set for innovating and investing in new technology, upgrading Massachusetts’ current infrastructure, and increasing the use and integration of clean energy generation and other DER systems. The platform established by the DPU, and the resulting initiatives, are responsible for Massachusetts’ relative success in solar development.