Solar power is simply the energy created by converting sunlight into usable electricity that can power your home or business. Most commonly, the sun’s rays are captured through something called a photovoltaic (PV) system. 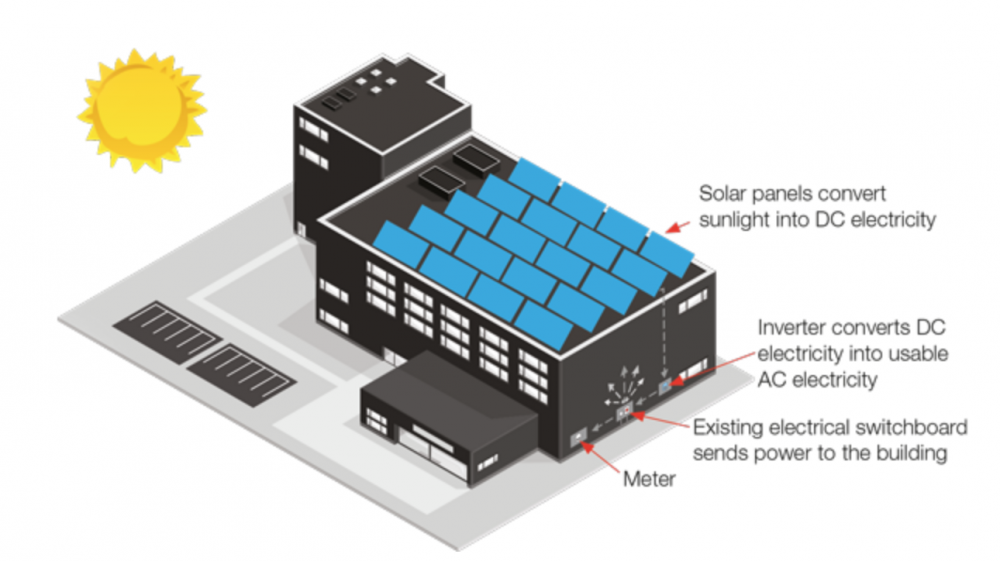 Solar PV systems have four main components: the solar panels, inverters, racking and mounting system, and the performance monitoring system. The cells in the solar panels capture sunlight and turn it into DC electricity which is then converted into AC electricity by the system’s inverters. The racking and mounting system allows you to secure and position your system properly on your roof or the ground. Finally, the performance monitoring system allows you to constantly track the amount of electricity your system produces.

Solar PV systems can be installed on residential, commercial, and industrial roofs or can be installed as a solar canopy, carport or ground mount. Now there are even solar panels that can float in a body of water known as floating solar or “floatovoltaics.” 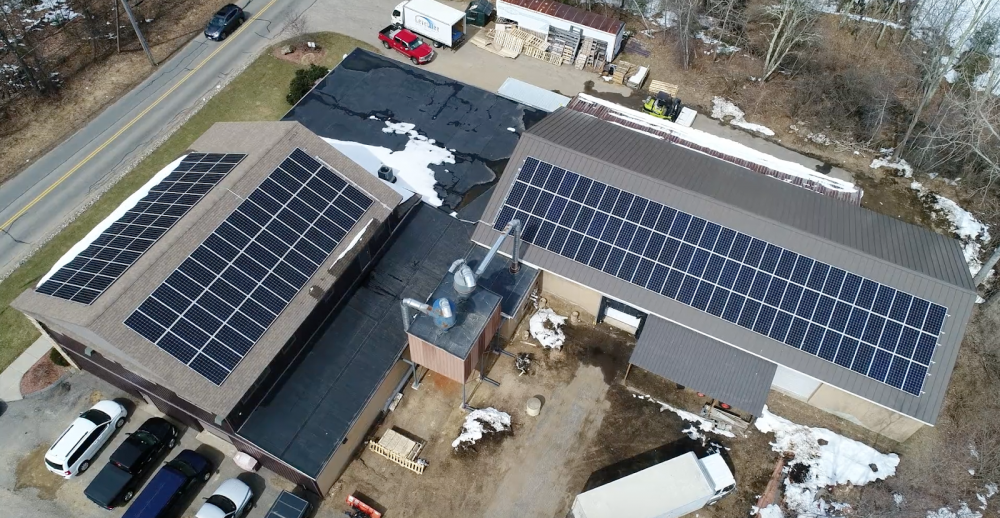 Installing solar at your home or business can drastically reduce if not completely eliminate your monthly electric bill. Some systems even produce more energy than you consume. With strong net metering laws in the majority of American states, your utility company will actually pay you for any excess energy you produce. New solar installations have a great return on investment (ROI). They currently have a payback period of about 4 to 5 years. After this, your solar installation (that likely has a 25 year warranty) will begin profiting! Moreover, installing solar will add value to your property.

Currently, the solar systems installed in the U.S. have enough capacity to completely power the equivalent of 12 million average American homes. This would cover the electricity needs of every single home in California.

As we continue to learn more about the devastating effects of global warming and climate change, switching to renewable energy sources has become increasingly significant around the world. As of late however, there have been some accusations that renewable energy technologies are not a viable “cure” for climate change. Specifically, it has been said that the production of solar cells is not environmentally friendly due to the large amount of energy required to produce the panels and because of the environmentally harmful by-products associated with their manufacturing. It has even been claimed that the emissions associated with the manufacturing of renewable energy systems like solar panels and wind turbines outweigh the saved emissions from these renewable facilities. According to well acclaimed scientists and environmentalists, these claims are untrue and are based on outdated and misleading information.

Claims by anti-renewable critics that solar and wind energy components have a carbon footprint as large as fossil fuels are wildly inaccurate. Specifically, one of the claims is that when factoring in production, the harmful GHGs emitted throughout the life-cycle of renewable energy sources is equal to that of fossil fuels. A number of climate-deniers even claim that it takes more fossil fuels to produce wind and solar systems than it does to simply burn the fossil fuels for energy directly. Yet, we have a great deal of scientific research that confirms this is not the case. An extensive 2017 study published in peer-reviewed journal Nature Energy reported that the long-term carbon footprints of both solar and wind power plants are just a small fraction of the carbon footprints of coal and natural gas plants. Additionally, research conducted by the U.S. Department of Energy's National Renewable Energy Laboratory showed that the life-cycle greenhouse gas emissions of fossil fuel power plants is significantly higher than that of wind, solar and nuclear sources. 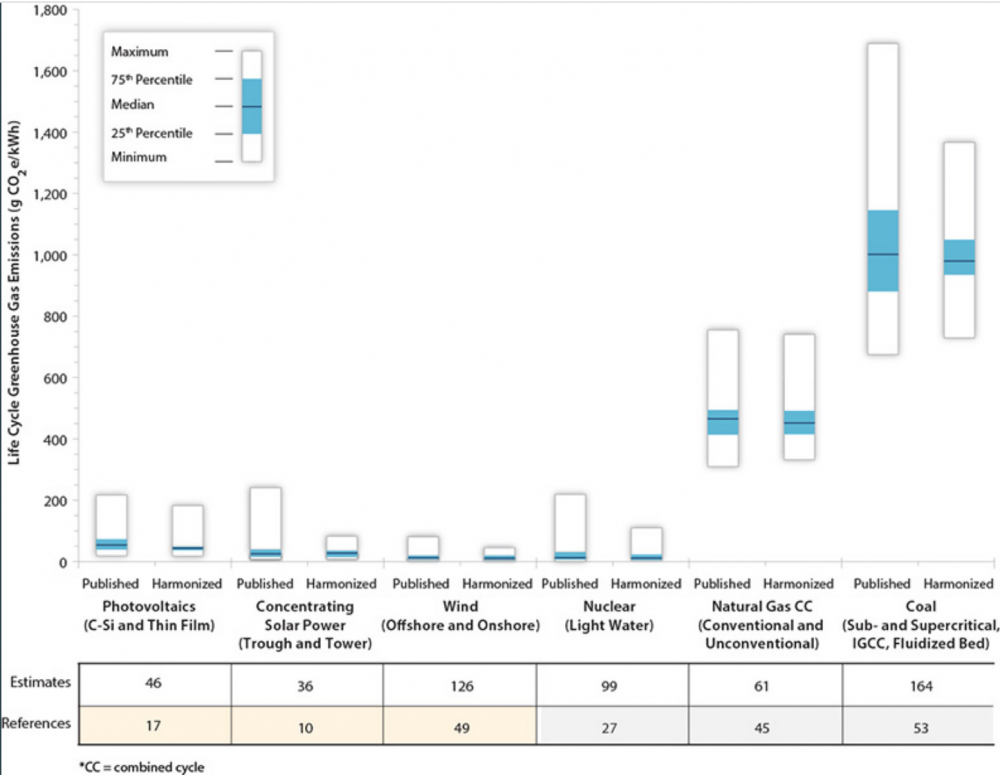 Climate scientist and energy systems analyst Zeke Hausfather shared on twitter the NREL’s graph shown above. It clearly displays how small the life-cycle impacts of renewable energy sources are compared to that of gas and coal.

It has also been said that solar panels take more energy to produce than they will ever generate. Again, this is an invalid statement. For today’s typical solar rooftop system, the energy payback period is approximately 3 to 4 years. The “energy payback period” is the amount of time a PV system must operate to recover the energy and associated generation of pollution that went into making the system. Not only is 3 to 4 years a small payback period considering today’s solar PV systems are expected to last 30+ years, but the anticipated multicrystalline and thin-film modules that are currently underway will have an energy payback period of just 1 to 2 years. Furthermore, well-acclaimed swiss researchers Dones and Frischknecht found that solar systems actually have a similar energy payback period to fossil fuel plants (including costs for mining, transportation, refining, and construction). Another study published in the journal Nature Energy projects that, by 2050, the energy involved in constructing and operating a solar or wind power plant will be merely 3% to 8% of its energy output.

Finally, the argument that solar and wind energy are not reliable or feasible solutions due to their “intermittency” is simply outdated and false. Although the sun is not always shining and the wind is not always blowing, climate and renewable energy scientists have worked for years on ways to address this issue and have designed several solutions. For instance, there are countless battery storage systems that allow us to store excess renewable energy generated and use it when supply is low (like on a cloudy or non-windy day).

Additionally, your home or business is connected to the electric grid, so now that almost all utility companies offer some form of net metering, you are able to take from the grid when your system is not producing enough electricity to meet your needs. And, when it’s producing too much you can sell it back to the utility company and reduce your next bill.

So, Why Switch to Renewables? Do the Benefits Really Outweigh the Costs?

Yes. The benefits of our global shift to renewable energy include:

1. Mitigate Climate Change and Reduce Global Warming
Switching over to clean energy sources is arguably the most effective way to mitigate climate change. The life-cycle greenhouse gas emissions associated with clean energy sources (meaning the emissions from each stage of a technology’s life including manufacturing, installation, operation, decommissioning) are extremely minimal compared to that of fossil fuels. If we reduce our carbon and GHG emissions, we will begin to slow down global warming and it’s harmful effects. Negative effects of global warming include: sea-level rise, coastal erosion and flooding, more frequent and severe storms, extreme temperatures, drought, wildlife extinction, ocean acidification threatening aquaculture, and countless others. A ground-breaking study by the National Renewable Energy Laboratory (NREL) explored the feasibility of generating 80% of the country’s electricity from renewable sources by 2050. They found that renewable energy could help reduce the electricity sector’s GHG emissions by approximately 81%.

2. Improve Public Health by Reducing Air Pollution
Air pollution from the fossil fuel industry kills a staggering 5 to 7 million people per year. In a study published in the journal Cardiovascular Research, excess deaths from fossil fuel air pollution comprises about 40% of all air pollution deaths. The Solutions Project, an organization founded by Stanford professor Mark Z. Jacobson, renewable energy executive Marco Krapels, and activists Josh Fox and Mark Ruffalo, conducted a worldwide study to measure the public health effects of pollution. They concluded that if the world moved to renewable energy the planet would collectively save $30 trillion in health care costs and more than 5 million lives.

3. Create Economic Development and Jobs
The renewable energy industry has become a major U.S. employer. It provides numerous jobs in manufacturing, installation, and more. In the U.S. today, clean energy jobs out number fossil fuels by about 3 to 1. Clean energy employment grew 3.6% in 2018, adding 110,000 net new jobs bringing the total number of clean energy jobs in America to almost 3.3 million.The U.S. Bureau of Labor Statistics forecasts America’s two fastest-growing jobs from now up through 2026 will be solar installer (105% growth) and wind technician (96% growth). Furthermore, building new renewable energy is cheaper than running existing coal plants and prices get even cheaper each year. Even more astonishing, by 2025, almost every existing coal plant in the United States will cost more to operate than building brand new replacement wind and solar systems within 35 miles of each plant.

4. Reduce Dependence on Imported Fuels by Diversifying Energy Supply
By diversifying our energy supply our country is able to protect itself from energy disruptions and strengthen our nation’s energy security. Clean energy sources like solar and wind energy allow us to produce our own energy domestically. This will reduce our reliance on imported fossil fuels and therefore increase our fiscal and political independence as a nation. Shifting to renewable energy sources also diminishes the threat of energy scarcity that comes with non-renewable fossil fuel dependence.

As our renewable energy technologies, specifically solar, continue to improve in efficiency and affordability, it is safe to say the benefits of switching to clean energy generation greatly outweigh the costs. In the words of American actor Ed Begley Jr., “you can’t make gasoline on the roof of your own house, but you can make electricity.”